A life journey in words and pictures

‘The Path Thus Far’ is part of Steve Schneider’s photographic legacy. Minnesotan photographer Steve picked his personal favourites from commercial jobs, journalism, landscape, portraiture and other personal projects he has photographed over the last four decades. Working closely together, he and I edited the pictures down to a selection of 145 images, and arranged those pictures into stories and sequences.

With each photograph, Steve wrote a short reflection on what the picture evokes for him. It could be a memory, a feeling or a story about how the picture was taken. He also included some quotes in the photo book from poets and writers he admires. It’s a fascinating journey through one photographer’s life, in words and pictures. 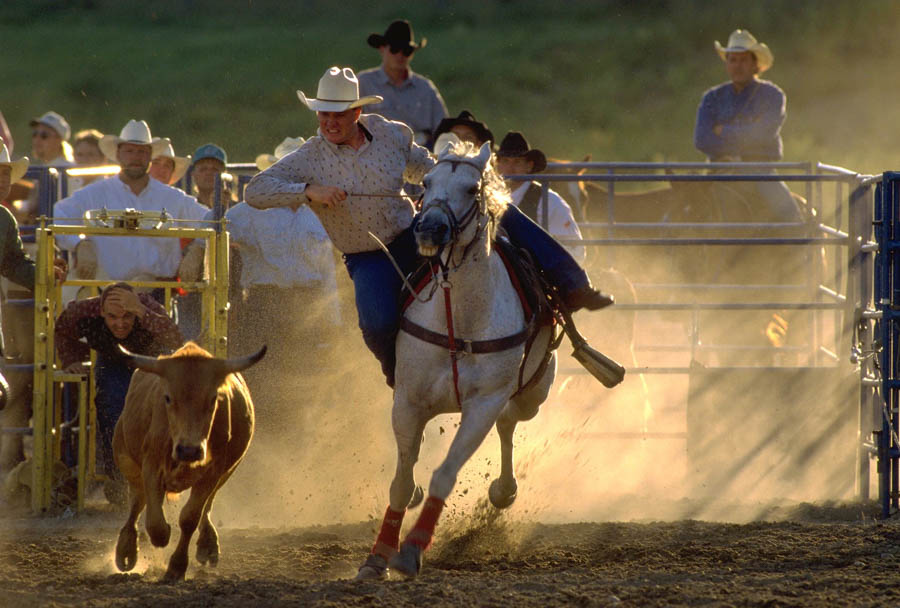 “The first time I went to a rodeo I became fascinated with bulldogging, where the rider’s aim is to jump from the saddle of a galloping horse on to the back of a running steer and wrestle it to the ground. Amazing to this city boy. Even more amazing from my perspective 25 years later is that the images are sharp – it was all manual focus back then.” 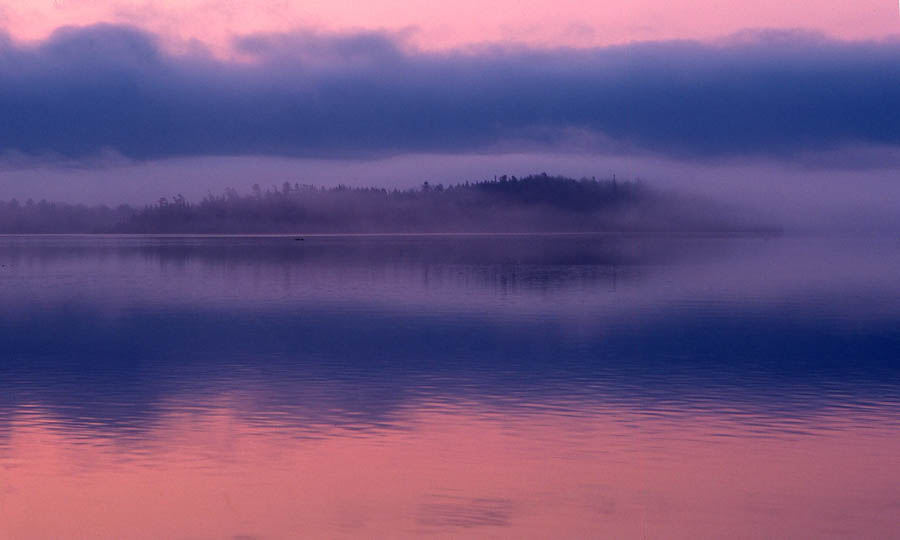 “In the Air Force I was stationed in upstate New York on the shores of Lake Champlain. On this morning the mood was serene. Pre-dawn light colored the sky and fog shrouded the island. Low clouds slipped by silently to the east.” 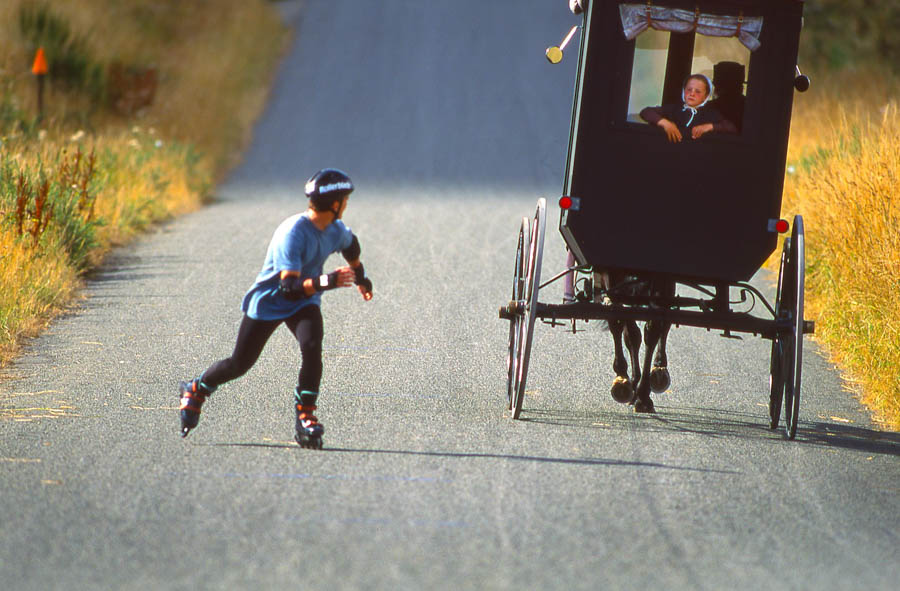 “This was the ‘money shot’ from a Rollerblade shoot in New Zealand. The concept from the ad agency was the visual culture clash of a Rollerblader passing an Amish buggy. We were shooting with a film crew who made the moving pictures, and the budget for the combined shoot was in excess of $270,000. The film commercial won awards for cinematography. Two weeks after the ads ran, Rollerblade canceled the entire campaign due to complaints about exploitation of the Amish.
The ‘Amish’ in the buggy were actors.” 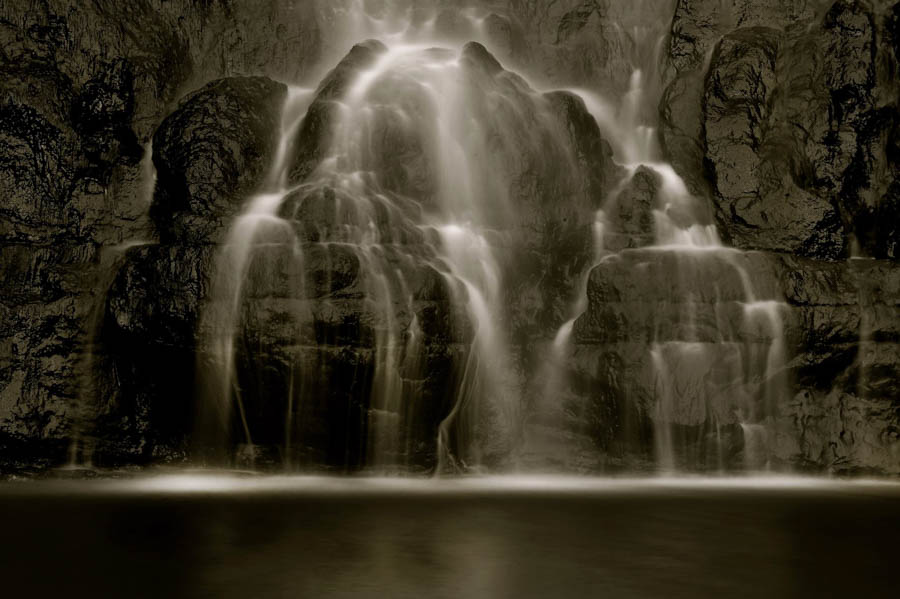 “Everybody needs beauty as well as bread, places to play in and pray in, where nature may heal and give strength to body and soul alike.”
John Muir 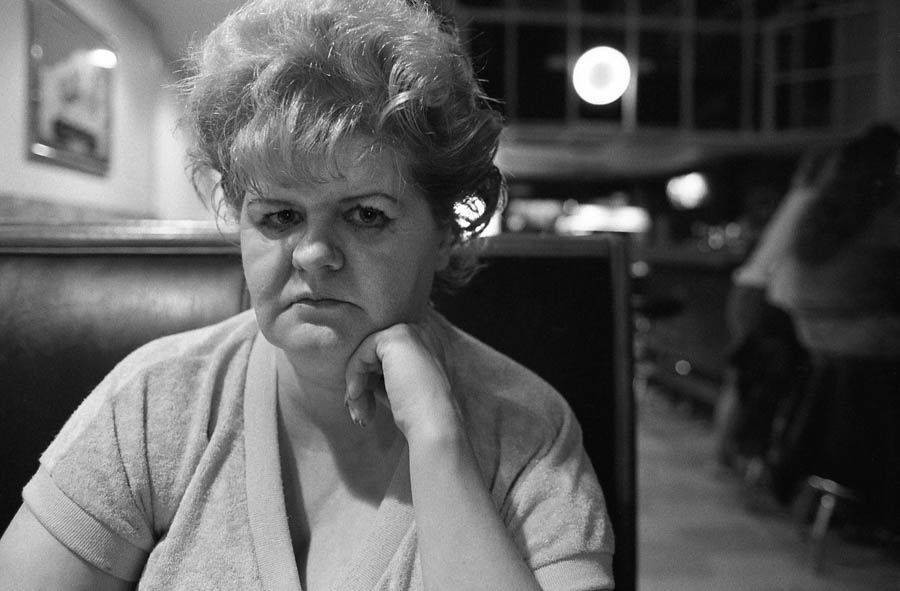 “Inside Curley’s Bar, I sat down with this woman. She told me her name was Gloria. She said she’d been a hooker for more than 40 years but now she hung out at this bar. She told tales of past glories. A couple of nights later I returned to the bar. I didn’t see Gloria anywhere, so I asked the bartender if he’d seen her. “Who?” he said. “Gloria,” I replied. “Oh… you mean Sandy” he replied, “No, she’s not here. She’s nuts anyway.””

Wisdom in the saddle 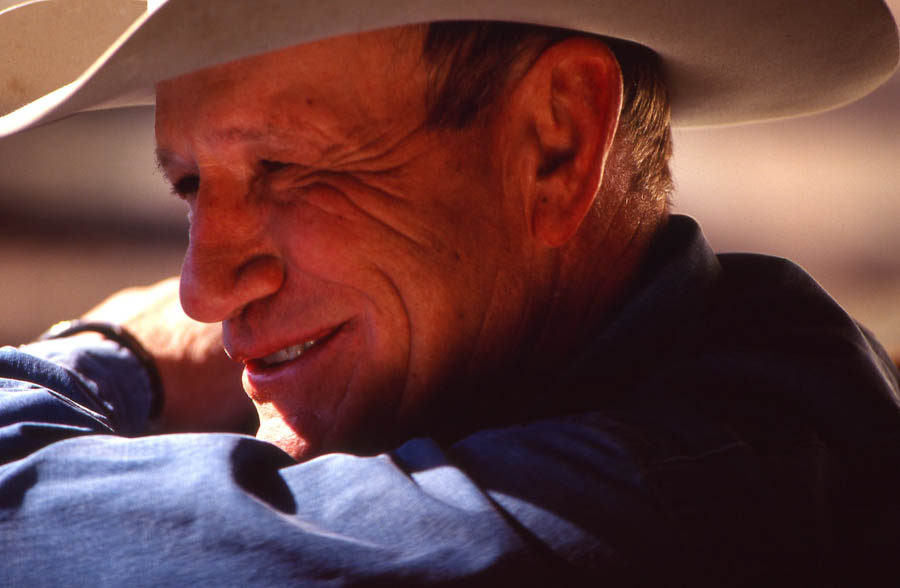 “I went on a Marlboro shoot as a second shooter. A Marlboro shoot was a wonder to behold. It wasn’t a job, it was an adventure. All the cowboys were real, not actors dressed up to look like cowboys. When not on a shoot, they returned to their ranches and did real work. On this shoot, the general consensus was that the best pure cowboy was Tommy. He was one of the older cowboys; when Tommy spoke, everybody listened. He was wisdom in the saddle.” 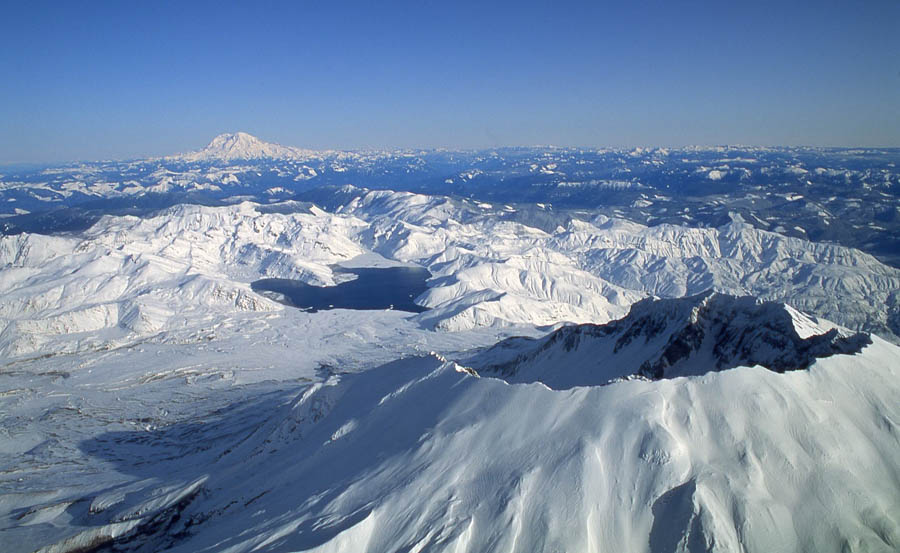 “United Airlines had just changed the paint scheme for their airplanes. There was only one plane with the new paint job, a brand new Boeing 747 fresh off the production line. I took this picture from that plane while a chase plane flew alongside making beautiful video and still images set against the backdrop of the Cascade Mountains. Visibility was a spectacular 80-plus miles.
At the moment I took this photograph out the co-pilot’s window, less than 500 feet above Mount St. Helens, the low-altitude alarm was screaming in its droll mechanical voice “PULL UP. PULL UP.” The two test pilots ignored that command so I could get my photo.”

In this photograph I am the leaf 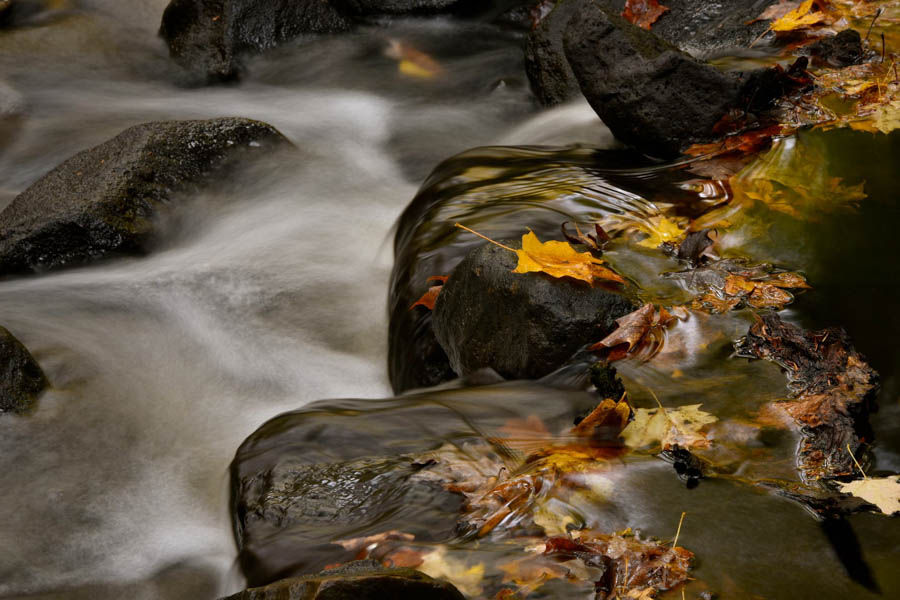 “Being out in Nature has always helped me achieve a certain inner stillness. Often in my commercial photography, I feel I am rushing from one subject to the next, one situation to the next. Really good photographs require a certain contemplation. To get to know a portrait subject is often a luxury that clients believe they can’t afford when the meter’s running. So I turn to Nature to slow myself down, to center myself. In this photograph I am the leaf, motionless on the rock as the water rushes on.” 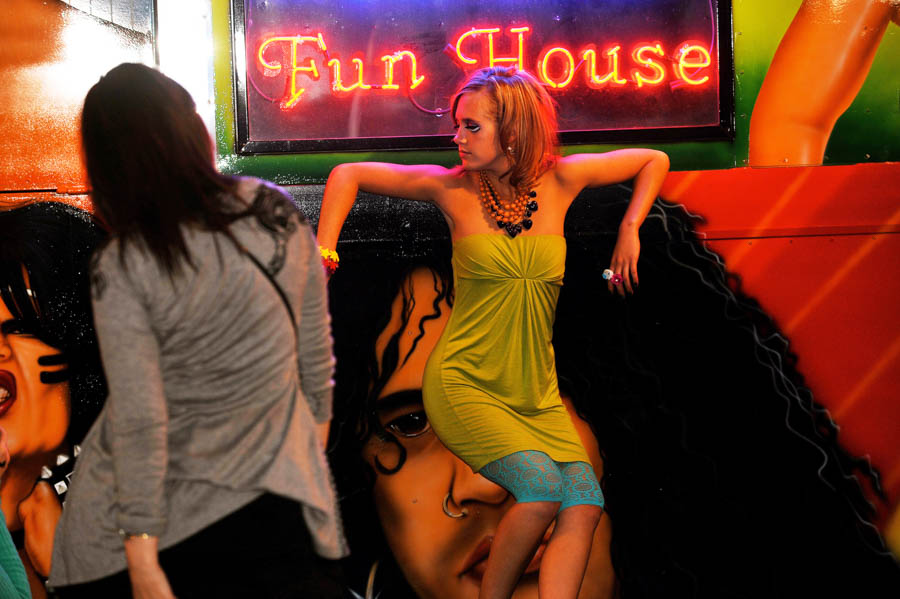 “Twilight at the Minnesota State Fair is a magical time. The light is an ever-changing mix of fading daylight, bright neon and warm tungsten. This mixed light blends with a cacophony of sounds and a plethora of smells to produce a dizzying sensual experience. The mind swims. I love it.
My eye is always drawn to words in an image. When I saw this model working for another photographer, the juxtaposition of word and image was perfect. And the mixed light was ideal.” 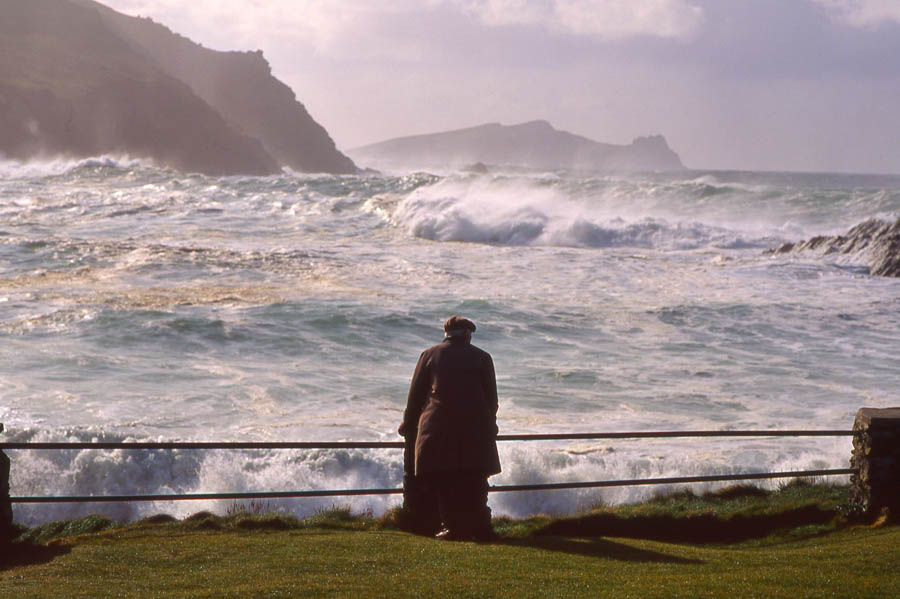 “A large storm in the North Atlantic from a few days earlier sent huge waves pounding Ireland’s western coast. Waves were 20 to 30 feet high and truly spectacular to witness. The sea holds me in fascination, magnified tenfold on this spectacular day.”

I go down to the shore in the morning
and depending on the hour the waves
are rolling in or moving out,
and I say, oh, I am miserable,
what shall –
what should I do? And the sea says
in its lovely voice:
Excuse me, I have work to do.
Mary Oliver

Do you have a life’s worth of photographs? Contact me to talk about making yours into a beautiful photo book. 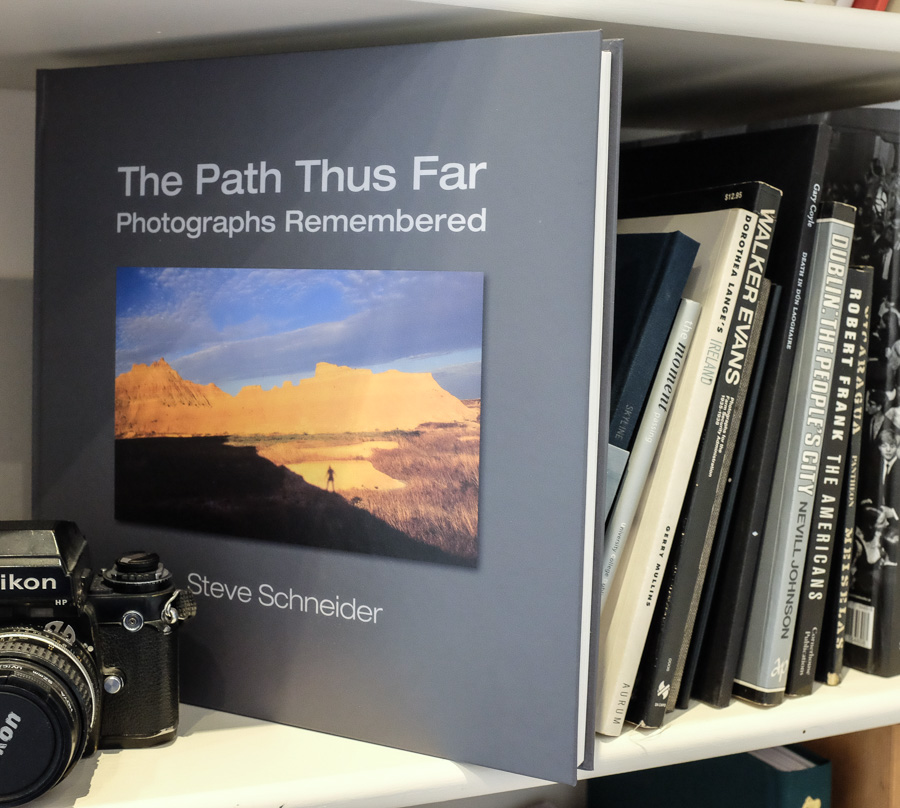 Before and After: giving life to old photos
Scroll to top